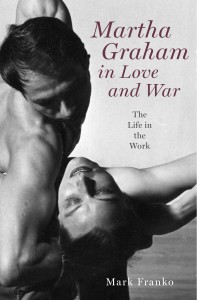 Martha Graham’s work was prominent in the New York dance world of the 1930s in the wake of her innovative Primitive Mysteries (1931). Yet, her reputation grew exponentially beyond the confines of dance and the New York art world after the premiere of American Document (1938) followed by its national tour in 1939. This is, paradoxically, a work that the Martha Graham Dance Company may be reluctant to perform today in a version close to the original. It was highly anti-fascist and popular front, very related to the political issues of the day, and critical of the history of the United States. Graham’s national reputation took hold at this time, and she was noted not only for her choreography and dancing but also for her political stance in the pre-war moment. It is paradoxical that this occurred by and through a work that is considered to be of little artistic value today. To some American Document might indeed appear old-fashioned or too specific to its time to merit revival, yet I think in this time of political uncertainty Graham’s anti-fascist work –done without updating the context and streamlining the aesthetic to be faster and brasher to account for what is assumed to be the audience’s diminished attention span —  may prove most successful. The obscuring of democratic traditions and the perverse rhetorical prevarications of our present political climate has more than a little resemblance to the period that saw the rise of fascism. Dance can be exciting precisely when it is not updated, not commented upon in the process of performing it. But, to understand such works and to convey them effectively to an audience demands a deep historical and theoretical grasp on the director’s part – one that might not have existed at the time of the premiere either on the part of the artists or the public — and an ability to translate that historical perspective into immediate artistic terms. Martha Graham in Love and War is not, however, a book about the revival of dances, but rather a study of Graham’s work between 1937 and 1953 – arguably her most productive period – that attempts to envision the work as it originally appeared. So, for example, I interpret Appalachian Spring as a wartime work (it premiered in 1944 during World War II). There is an awareness and fear of war that pervades the work despite the temporal indeterminacy Graham so carefully practiced by implying it took place during the Civil War of the previous century.  In reality, the presence of the Civil War, in particular of the Escaped Slave character who was cut but yet retained in the Revivalist, as well as the presence of the abolitionist John Brown beneath the Husbandman, allowed Graham to imply an earlier popular front politics critical of injustices in American life in the guise of a patriotic wartime ballet. This analysis was possible by examining the scenarios she wrote for Aaron Copland in preparation for the work. Copland wrote his score for some characters that did not make it to the stage (another is the Indian Girl). But none of them entirely disappeared. I theorize this kind of choreographic process as one of character compression, which leads to a use of the archetype in postwar works.

Graham’s scrapbooks housed at the Library of Congress seem to have saved every bit of ephemera concerning her career, all meticulously cut out and pasted in, probably by her mentor and musical director Louis Horst. They allowed me to reassess her relationship to advertising and popular culture as well as the media interest in her as a complex public figure as of the early forties. The newspaper clippings show that her Graham was taken up as a politically influential international figure by the early forties. With the entry of the US into World War II, however, she was enlisted in the war effort as an example of “productive femininity”. It was at this point that her fame grew at the expense of a distortion of her personal and artistic personality. Her role was to reassure the working woman she would not sacrifice their femininity to the war effort. The war brought women into the work place but also reinforced gender stereotypes by virtue of the conformism that invariably accompanies wartime mentality. After the war, Graham turned to Greek myth and characters such as Jocasta, contradicting the more wholesome wartime image that had been constructed of her with a more perverse image. If her original positioning in the media had been political, the notoriety she gained during the war was at the expense of her fierce independence as a woman artist. By the end of the decade she was out of touch with the new consumerism that pervaded American society, but a sacred monster of the theater who drew large audiences. The one goal she retained since her first popular success in 1938 was to reach as broad a public as possible without compromising her modernist aesthetic, and by the mid forties she achieved this goal with the unheard of two-week Broadway season.

This was in no small measure thanks to the efforts of her dance partner and lover Erick Hawkins who first came to her work in 1938. In addition to dancing in her company, serving as a company manager, booking agent, technical director, and general factotum, Hawkins, who had graduated with a major in classics from Harvard, brought a knowledge of the myth culture of ancient Greece (Hawkins read Greek) that was most useful to Graham. He also dreamed up the first scheme for fund raising in the dance world and executed it successfully. Their relationship was, however, in many ways a tormented one. Although Hawkins was demonized in Agnes de Mille’s biography Martha for walking out on Graham in London in 1950, the correspondence between Hawkins and Graham tells a different story.

But, then there were the myth works of the immediate post-war era that made an appeal to the themes sanctioned by psychoanalysis as universal – notably the Oedipus complex explored in Night Journey (1947). How could she reconcile a fascination with myth so identified with Nazi fascism — think of Leni Riefenstahl’s Olympia, which also premiered in 1938 – with her own anti-fascist stance? This was a mystery to unravel. Her well-known interest in Jung only aggravates this question as recent scholarship has shown Jung’s involvement with Nazism during the Second World War.

Knowing that Graham was a voracious and serious reader of modern literature and psychology I thought it possible to unearth the logic behind choreographic thinking in many of her artistic choices, influenced by her extended literary ruminations. But, could her reading be tracked? Of course, there were clues. Bertram Ross (one of her lead dancers) said she was reading Esther M. Harding’s Psychic Energy while choreographing Night Journey. Might her library have survived her death intact? Certainly, the publication of The Notebooks of Martha Graham (1973) was a strong indication that her choreography was linked to a practice of writing and reading, even though the Notebooks are often quite difficult to decipher.

Also key to Graham’s work of the immediate postwar era were Otto Rank and Erich Fromm. She had actually consulted with Fromm – and some say had an affair with him – in 1946. Fromm popularized, to some extent, key ideas of Rank. Graham quoted both men in her notes. Although her connection to Freud is often touted, Graham was much more up to date: she was a choreographic post-Freudian. Her myth works dealt with the cultural value of incest, the demystification of the Oedipus conflict, and the revalorization of the mother in psychoanalytic theory, something principally attributed in psychoanalytic literature to Rank’s The Trauma of Birth. Although Graham did read Jung, one should differentiate between the influence of psychology and psychoanalysis in her work. She underwent an extended analysis with Frances G. Wickes, a prominent New York Jungian, in the early fifties. Paradoxically, her analytic experience did not lead to further myth works but to her only anti-myth work, Voyage (1953). All but disappeared from the annals of Graham performance, yet Voyage (retitled Theater for Voyage in 1955) set to a score by William Schuman deserves to be rediscovered – perhaps even on the stage.